African nations are being left behind in obtaining Covid-19 vaccines as richer countries stockpile vaccines and prioritize their own populations — despite a surge in cases and a new variant affecting the continent.On Monday, South Africa took delivery of its first million doses of the Oxford/AstraZeneca Covid-19 vaccine, with another 500,000 expected later this month.

It will begin inoculating health workers in February, the health ministry told CNN, becoming one of the first countries in Africa to receive large doses of the Covid-19 vaccines.South Africa has also ordered another 20 million vaccines through a deal with Pfizer/BioNTech and expects to purchase another 9 million from Johnson & Johnson, Health Minister Zweli Mkhize told a local media channel on Monday. 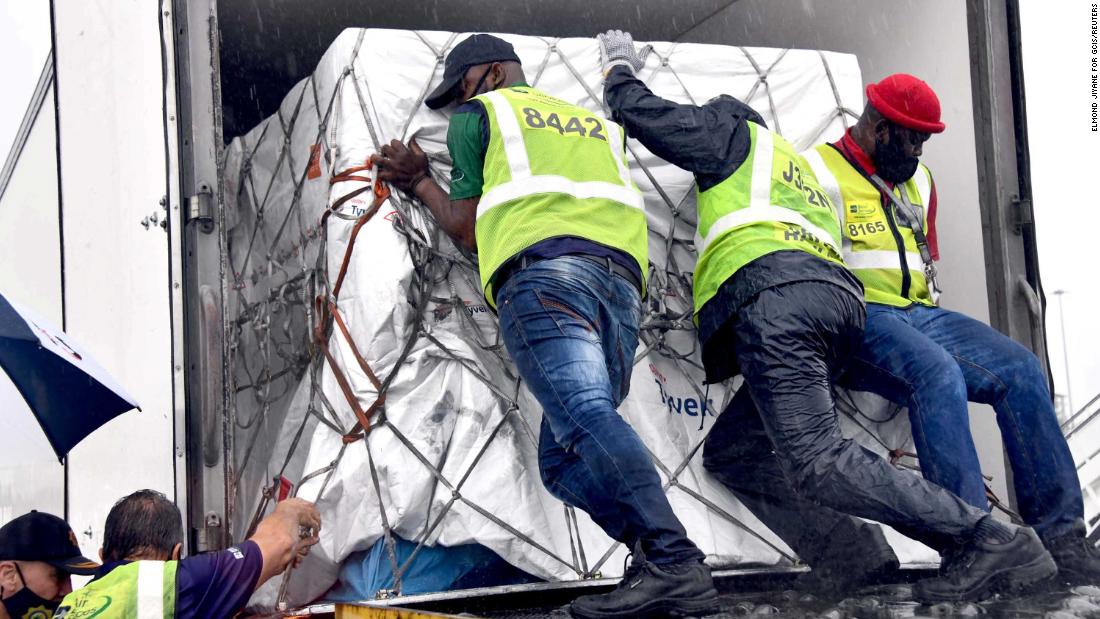 Workers load South Africa’s first Covid-19 vaccines as they arrive at OR Tambo airport in Johannesburg on February 1Seychelles was the first country in sub-Saharan Africa to start vaccinating its population, using doses of China’s Sinopham vaccine — with a target to be the first to have 70% coverage among adults, according to a media release.The island of Mauritius also started vaccinating frontline workers on January 26, after India donated 100,000 doses of the Oxford/AstraZeneca vaccines.In December, Guinea, in West Africa, ordered 55 doses of the Russian Sputnik V coronavirus vaccine and gave the first doses to 25 officials, according to The Associated Press.In North Africa, Morocco and Algeria also recently began immunization programs, according to Our World in Data, an independent statistics website from Oxford University’s Global Change Data Lab.In comparison to other regions, Africa was slow to start and is likely to be slow in catching up, health officials said.Emerging markets like South Africa have also found themselves paying more than their wealthier counterparts.

South Africa is the country worst affected by Covid-19 in Africa, recording nearly 1.5 million cases to date and more than 45,000 deaths. Its health ministry told CNN global competition forced it to purchase the Oxford/AstraZeneca coronavirus vaccine from the Serum Institute of India (SII) at nearly double the price — $5.25 per dose, according to Reuters — paid by other wealthier countries.”There is a global demand for the vaccine in the first quarter. We are not aware of a cheaper option that is immediately available,” the health ministry’s head of communications, Popo Maja, said.The SII did not immediately respond to requests for comment.This price is higher than the $3 per dose other African countries are reportedly set to pay in a deal the African Union (AU) secured two weeks ago. That order promises 270 million doses of Oxford/AstraZeneca, Pfizer/BioNTech and Johnson & Johnson vaccines for African countries, again through the SII.But few cheap vaccine options are available to African countries because of continued global demand, leaving the continent trailing behind, say government officials and health organizations such as the World Health Organization (WHO).

Making their own deals

Most African countries suffered fewer deaths from the first wave of the virus last year compared to other parts of the world, but case numbers are now surgingacross the continent, particularly in the southern region.The African continent has recorded more than 3.6 million cases, while deaths increased by 40% since January 1 to reach 92,000, according to Johns Hopkins University data.South Africa is also dealing with a new variant of the virus that emerged there, which health experts say is possibly more transmissible and capable of evading the effect of vaccines. It is driving record case numbers and has been detected in Botswana, Ghana, Kenya, Comoros, and Zambia as well as more than 20 non-African countries so far.

How solar tech could help distribute Covid-19 vaccines in Africa“If we don’t manage the situation we will end up with a moral catastrophe in our hands,” the head of Africa’s Centres for Disease Control and Prevention, John Nkengasong, told CNN last week. “If we have those vaccines and we continue to apply aggressively the public health measures, the issue of variants would disappear.”Last year, WHO set up the Access to Covid-19 Tools (ACT) Accelerator,a partnership to coordinate production and boost access to treatments, vaccines and tests.COVAX, the ACT Accelerator’s vaccines branch, aims to distribute 2 billion Covid-19 doses globally by the end of this year, with 690 million forecast for Africa’s lower-income countries.The initiative is led by WHO; the Coalition for Epidemic Preparedness Innovations; and Gavi, the Vaccine Alliance. It will be funded by development agencies and donations from groups such as the Bill & Melinda Gates Foundation.If Gavi’s supply forecast is correct, the countries will only have enough to fully vaccinate 27% of their combined population, James Fulker, a spokesperson for Gavi, told CNN.WHO is asking richer countries to prioritize fair supply instead of making their own extensive deals with pharmaceutical companies or else share their unused doses with COVAX.At the same time, the health agency is encouraging poorer countries to secure additional coverage through their own deals.The AU has also taken the lead in seeking out deals for its member countries, by setting up the African Vaccine Acquisition Task Team (AVATT).Last week, AVATT procured 400 million doses from the SII, adding to the 270 million secured in January, Nkengasong said.

The global disparity in access to Covid-19 vaccines has caused widespread anger among Africa’s leaders, including South Africa’s president and chair of the AU, Cyril Ramaphosa, who warned during a World Economic Forum virtual meeting last week that richer countries are “hoarding” vaccines, and urged global action to ensure an equitable rollout.”We are concerned about vaccine nationalism,” Ramaphosa said. “The rich countries of the world went out and acquired large doses of vaccines from the developers and manufacturers of these vaccines and some countries have even gone beyond and acquired up to four times what their population needs.”For example, Canada and the United Kingdom have purchased enough vaccines to cover 500% and 300% of their populations respectively, according to data from the Duke Global Health Innovation Center. 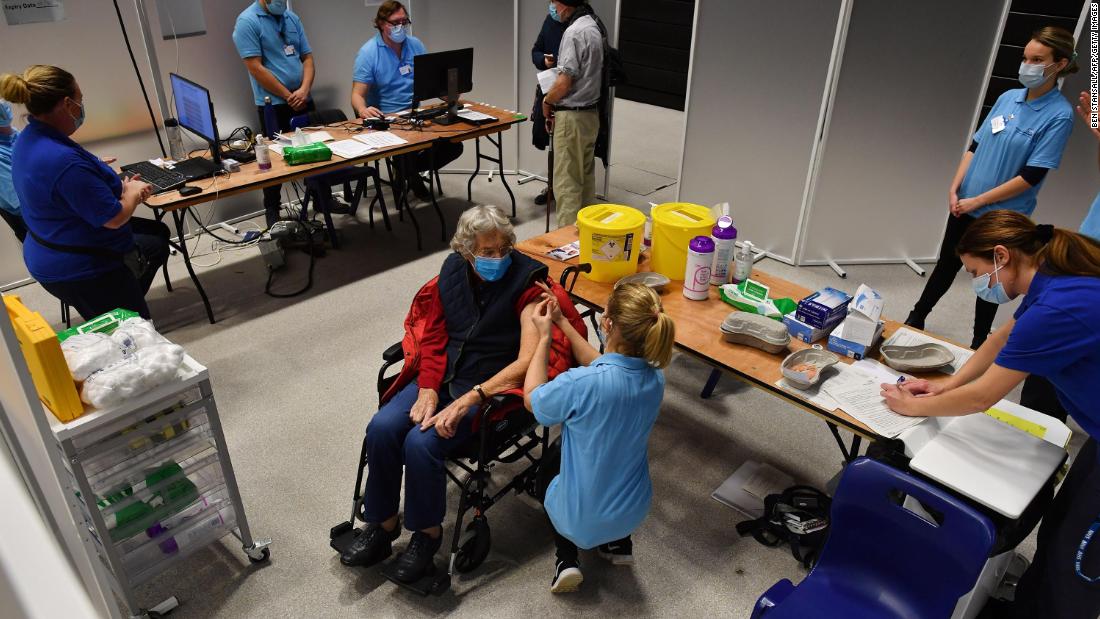 A patient receives an injection of the Oxford/AstraZeneca jab at a centre in the UK which has enough vaccines to cover 300% of its populationThis behavior is marginalizing the countries that are “most in need” of the vaccine, Ramaphosa added.WHO has echoed Ramaphosa’s words on several occasions, stating recently that the vaccine gap between rich and poor countries is widening.

But countries in sub-Saharan Africa are working with what they can to get some coverage underway.Ghana is planning to procure 17.6 million doses of different vaccines by June, its President, Nana Akufo Addo, said while announcing new restrictions in a speech on Sunday. The West African nation of 30 million is fighting a second wave, with nearly 67,000 cases reported and a record daily total of 1,583 cases on Sunday.In East Africa, Kenya will begin vaccinating this month and hopes to have 1.25 million people inoculated before June, according to its health ministry on Friday.

China has promised millions of coronavirus vaccines to countries globally. And it is ready to deliver themUganda, with a population of around 44 million, plans to access vaccines through COVAX and its health ministry has said it will try to procure more from AstraZeneca It is also exploring the possibility of getting vaccines from China, if WHO approves its vaccine.In Nigeria, Africa’s most populous nation, officials say they will begin to receive vaccine doses this month through COVAX. The health minister, Osagie Enanire, is also working with the AU to secure vaccines from its deal.The country has been grappling with a shortage of oxygen and rising case numbers. Nigeria will receive 16 million doses in COVAX’s initial distribution, the third most of any country globally.

The value of sharing

Despite the progress made, African countries on the whole face a long wait in receiving Covid-19 vaccines. For example, less than 20% of the 270 million doses first ordered by the AU will be available before June, according to a press release from the African Vaccine Acquisition Task Team.COVAX forecasts that by that time it will have supplied 640 million doses, about 30% of which are for AU countries, Fulker said.In contrast, the European Union expects member states to vaccinate 70% of their adult populations by the summer.”It is in their common interest, in the collective interest that people get vaccinated in a timely fashion all over so that we can get out of this pandemic as a collective,” Nkengasong told CNN. “There’s no way only parts of the world like the richer nations will get out of this without the southern hemisphere also getting out of the pandemic.”In his opening remarks at the 148th session of the WHO executive board on January 18, its director-general, Tedros Adhanom Ghebreyses, said the approach of first world countries was “self-defeating.

“Until we end the Covid-19 pandemic everywhere, we won’t end it anywhere. As we speak, rich countries are rolling out vaccines, while the world’s least-developed countries watch & wait,” he added at a media briefing on January 25.Ghebreyses wants vaccination to be underway in every country within the first 100 days of 2021, but this may be an ambitious target when many countries in Africa have yet to receive vaccines and may not for some weeks.