Dr Ngozi Okonjo-Iweala has been disqualified from contesting for the office of the Director General of the World Trade Organisation by the African Union.

The disqualification is coming after President Buhari withdrew the nomination of Fedrick Agah and replaced him with Okonjo-Iweala.

The office of the legal counsel at the African Union had said that Iweala’s nomination was against laid-down rules as the executive council of the union in its 35th ordinary session that was held in Niamey, Niger, asked member countries to present candidates to the AU ministerial committee on candidature by November 30, 2019, to allow it endorse a consensus candidate at its February 2020 ordinary session.

In the letter dated June 15 and addressed to the permanent mission of the Republic of Nigeria to the African Union in Addis Ababa with Reference Number: BC/OLC/24/5056.20, the counsel said the nomination of Okonjo-Iweala violates Rule (11), 1, 2 and 3, Rule 12 and Rule 15(3) of the rules of procedure of the committee on candidatures within the International System of the AU as well as Council’s Decisions Ex CI 1072 (XXXV), Ec CI Dec 1090 (XXXVI) and Assembly Dec 795 (XXXIII).

“During the February 2020 summit, the three candidates were considered.

“However, due to the lack of consensus to agree on one suitable candidate during the February 2020 summit, the executive council through decision Ex Cl 1090 (XXXVI) recalled the Ex Cl Dec 10T2 (XXXV) and endorsed respectively the candidates from Benin, Egypt and Nigeria as shortlisted for the post of the director-general of the WTO (the names of the candidates were incorporated in the report of the committee on international candidatures presented to the executive council).

“Moreover, it requested the ministerial committee on African candidatures within the international system to consider the matter and report to the executive council’s 3rd ordinary session with a view to agreeing on a single candidate.”

Premium Times reported that some conditions for nomination of candidates were listed as thus;

“Candidatures shall be submitted to the commission at least two (2) months prior to the sessions of the executive council, which shall consider them.

The submission shall be accompanied by relevant information related to the submitted candidatures, including the nature of each post, date and place of elections.

“The condition on which candidate submission may be accepted after the deadline is when no other candidatures for the position have been submitted in the prescribed time; the submission of candidatures has been closed; and there are more vacancies reserved for Africa than the submissions received, among others”.

The counsel added that the Executive Council had endorsed the nominations of Fedrick Agah, Eloi Laourou and Abdulhameed Mamdouh before Nigeria sought to substitute its nomination. It was further learnt Okonjo-Iweala did not meet the submission deadline and there are no more vacancies into which Nigeria can make nomination.

“It is a recognised principle of international law that a sovereign state has the right to substitute and replace a nomination of its citizens as it may wish for a position. 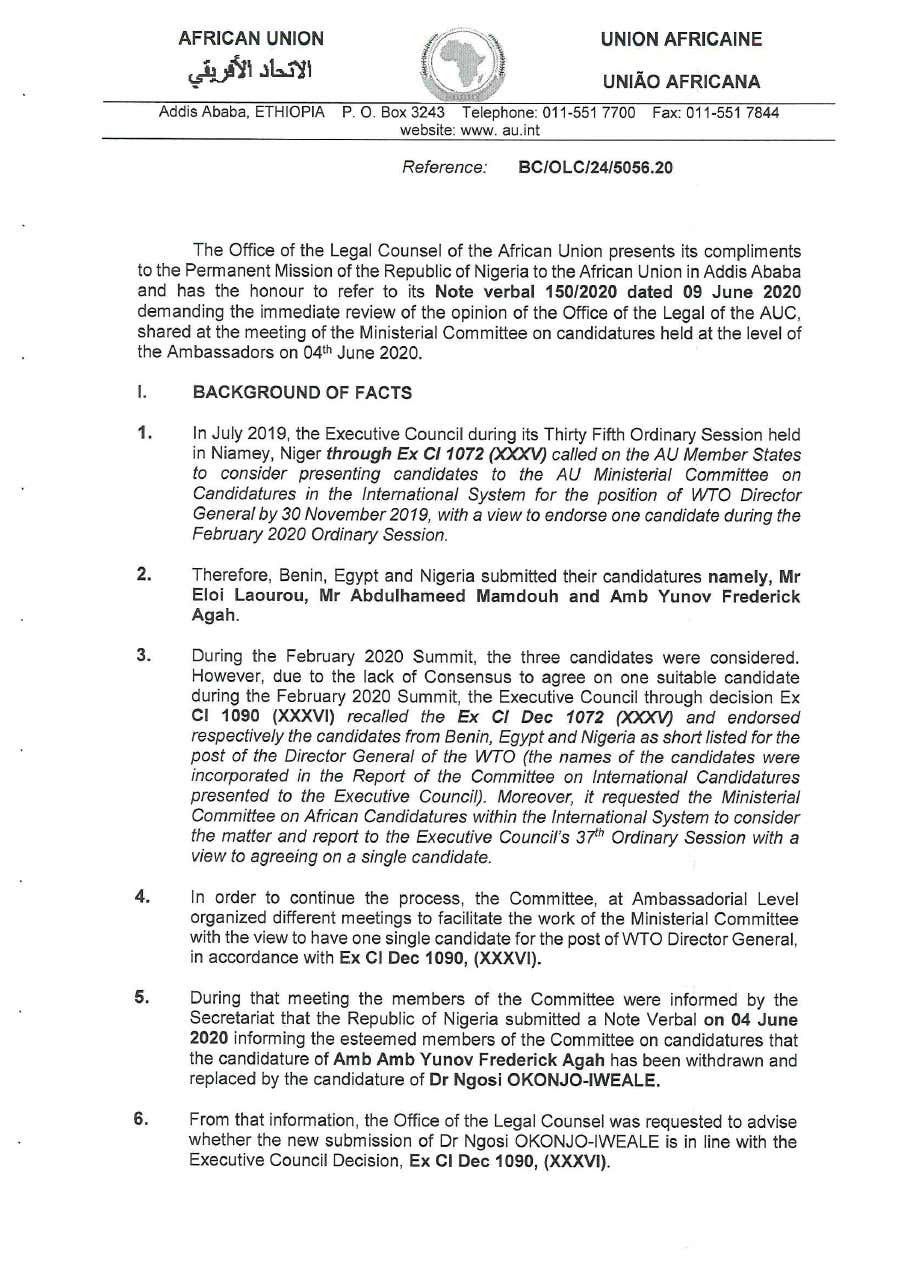