Lewis Hamilton paid his own tribute to Chadwick Boseman after closing to within two wins of Michael Schumacher’s all-time Formula One record by claiming the Belgian Grand Prix on Sunday.

The defending world champion led all 44 laps at Spa-Francorchamps, with Mercedes teammate Valtteri Bottas in second place and Red Bull’s Max Verstappen completing the top three.
Hamilton — the only black driver in Formula 1 — was stunned by the death of the 43-year-old actor, who lost a four-year battle with colon cancer Friday night. 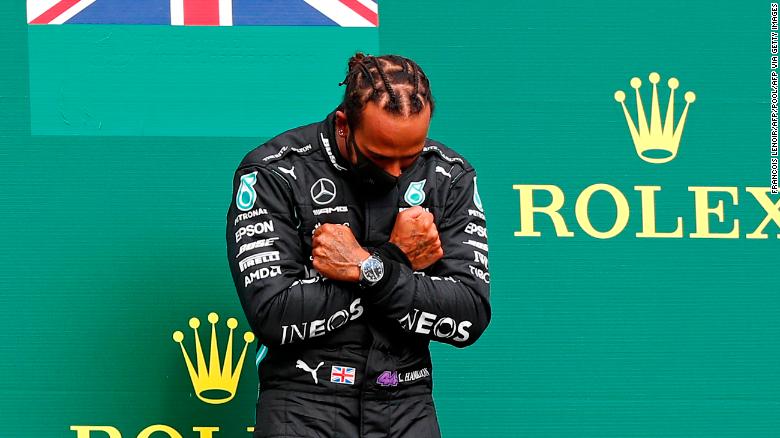 Lewis Hamilton adopts a Black Panther gesture on the podium of the Belgian Grand Prix in tribute to actor Chadwick Boseman.
On the Spa victory podium, Hamilton posed in the Wakanda salute Boseman made famous as the title character in the film “Black Panther” and then spoke about the inspiration behind another famous victory.
“We are continuing to push the envelope, and it feels great to finish on a high this weekend, particularly with Chad (Chadwick Boseman) dying because he made everyone feel like a superhero,” said Hamilton.
It was his 89th career win as he chases a record-equaling seventh world championship, another historic best held by the legendary Schumacher.
However, it was another humiliating afternoon for Schumacher’s former team Ferrari, with four-time champion Sebastian Vettel in 13th place, and teammate Charles Leclerc finishing 14th, a far cry from his brilliant maiden victory at Spa last season.
Schumacher claimed 72 of his 91 wins with Ferrari, but the team are a sad shadow of that dominant past ahead of their home race at Monza and their 1,000th Grand Prix at Mugello a week later.
Tags: after, Belgian, Boseman, Chadwick, GP, Hamilton, Lewis, Pays, to, Tribute, Victory