He national reckoning over George Floyd’s death is being dragged into the epicenter of the political battle between President Donald Trump and Joe Biden.

In a way that could further inflame deep divides and complicate the bid to cleanse the nation’s police forces of racial prejudice.

Trump, seeking to dig himself out of a political hole only five months from Election Day, has seized on calls by some liberal activists to “defund the police” to accuse his Democratic rival of siding with extremists in his party who are out of step with mainstream Americans.

But the former vice president on Monday calmly told Trump he doesn’t support such moves, arguing instead that federal funds for law enforcement should mandate honor and decency in the ranks, after traveling to Houston to offer solace to Floyd’s family ahead of his funeral on Tuesday.
The clashes between Biden and Trump reflect how a recently slumbering presidential campaign has been given new intensity by the remarkable outpouring of empathy for African Americans in diverse national protests. The most direct exchanges between the two White House foes are occurring as congressional Democrats unveiled a new plan to overhaul policy and as Trump searches for a culture war issue to help him cut his now significant polling deficit with Biden.

“The Radical Left Democrats want to Defund and Abandon our Police. Sorry, I want LAW & ORDER!” Trump tweeted Monday, on a day when his campaign said he would resume rallies in two weeks, even though such gatherings would likely infringe social distancing precautions amid the coronavirus pandemic.

Trump’s claims take a complicated issue and twist its most explosive element for maximum damage — a campaign technique that is not new but one at which the President excels.
The push for a policing overhauling is hugely complex, involves entrenched political forces and will jar some of the nation’s most sensitive racial and societal fault lines. Reformers argue that money should be redirected from training and arming more and more cops to programs that invest in public housing, health care, community projects and social ailments that make urban areas more livable and less susceptible to crime that can contribute to tensions between police and residents. 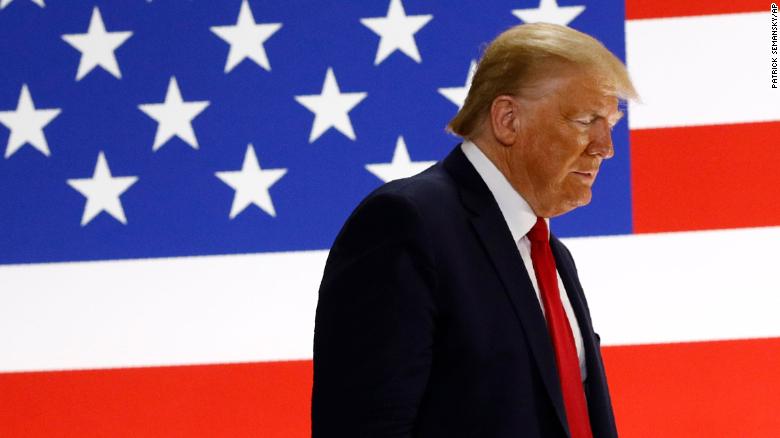 But this debate is going to unfold in the white heat of a presidential campaign, a backdrop that destroys nuance and can make consensus impossible. The coming weeks will also test whether the force of public pressure for changes, expressed in huge, diverse crowds, can triumph over impediments of a polarized political system topped by a President demagoging the issue in search of electoral salvation.
On such a sensitive issue, Biden will be constantly required to show the political dexterity and precision under fire he has sometimes lacked in a long political career as he discusses an intricate and risky issue.

“No, I don’t support defunding the police,” Biden told CBS. “I support conditioning federal aid to police, based on whether or not they meet certain basic standards of decency and honorableness. And, in fact, are able to demonstrate that they can protect the community and everybody in the community.”

Trump’s attacks prompted Democratic House Majority Whip James Clyburn to warn his caucus members that talking about “defunding” the police could “hijack” efforts at reform. New York Rep. Alexandria Ocasio-Cortez, who Trump seeks to highlight as representative of Biden’s party, has called for slashing the budget of the New York Police Department. She told caucus members on the same call to try to understand the complex debate and not to mock it, CNN’s Manu Raju reported.
Trump and his conservative media machine hopes to trap the former vice president between liberal base voters already suspicious of his record on crime and moderates who are open to reform but who might be alarmed by warnings police could disappear from the streets.
The five months until Election Day will also highlight the Democratic Party’s capacity to operate as a unified force, amid indications its more radical elements could continually lay political minefields for leaders such as Biden.
And ultimately, hopes for police reform legislation — in this administration or the next — will depend on whether voters are able to distinguish genuine and difficult debate from the deforming distractions of a campaign or whether dispiriting self-serving political combat dims public momentum for change.
But Trump is also playing on risky ground. Misleading campaigns that Democrats want to eradicate the police force entirely might absolve him of discussing the serious issues of reform. But recent polls, including by CNN, show unprecedented concern over police brutality, and voters could punish the President if he doesn’t take the movement unleashed in recent weeks more seriously.
Tags: #politics/donald-trump-joe-biden-police-funding, Reckoning- Over -Floyd's -Death -And -Calls -To- Defund- Police Challenge- Trump- And -Biden