Serena Williams’ quest for a record-equalling 24th Grand Slam got off the mark as Andy Murray rolled back the years with a vintage comeback at the US Open Tuesday.

Six-time winner Williams powered past 96th-ranked Kristie Ahn after Murray came from two sets down to win a five-set thriller in his first singles Slam match in 18 months.

The pair both progressed to the second round on day two of a US Open that is unrecognizable from previous tournaments, without spectators and with stringent measures to prevent Covid-19 infections. 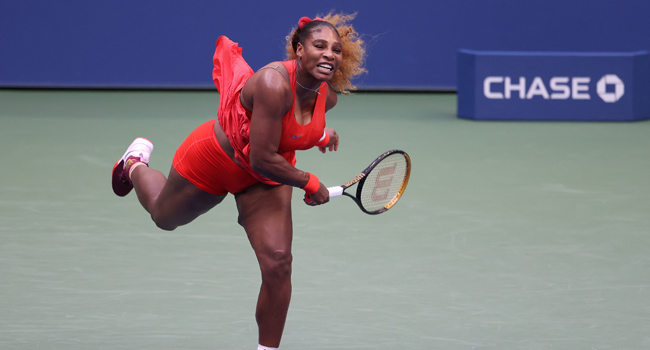 NEW YORK, NEW YORK – SEPTEMBER 01: Serena Williams of the United States serves the ball during her Women’s Singles first-round match against Kristie Ahn of the United States on Day Two of the 2020 US Open at the USTA Billie Jean King National Tennis Center on September 1, 2020, in the Queens borough of New York City. Al Bello/Getty Images/AFP

Williams defeated Ahn 7-5, 6-3 as she started the latest bid of her protracted pursuit to match Margaret Court’s Grand Slam title with a straight-sets win at Flushing Meadows.

The 38-year-old overcame the loss of her first service game in the opening set to advance at a virtually empty Arthur Ashe Stadium, where artwork by black artists is displayed in honour of the Black Lives Matter movement against racial injustice.

“I was really happy with how I just fought for every point no matter how I was playing,” said Williams.

It has been more than three years since Williams won her 23rd Grand Slam title at the 2017 Australian Open — when she was already pregnant with daughter Olympia.

She has come close since, reaching four major finals only to come away empty-handed, but should have a better chance this time around with several top players absent because of coronavirus concerns or injury.

World number one Ashleigh Barty, the second-ranked Simona Halep and Canadian Bianca Andreescu — who stunned Williams in last year’s final — are all absent from the behind-closed-doors tournament.

A title win for Williams would also see her become the most decorated women’s player at the US Open in the modern era. She is currently tied with Chris Evert on six.

The Scotsman, who who has barely played in 2020, said he had learnt a lot about his physical condition and the metal hip he received during surgery last year.

“I’ve just played a four-and-a-half-hour match when I never thought I’d be able to,” he told reporters.

“I’m not sitting here with my hip throbbing and aching. I’ll be able to sleep fine tonight,” Murray added.

Tenth seed Garbine Muguruza, the 2016 French Open champion and 2017 Wimbledon winner, advanced to round two with a 6-4, 6-4 victory over Japan’s Nao Havino.

She dedicated the win to compatriot Carla Suarez Navarro, who revealed Tuesday that she had been diagnosed with Hodgkin lymphoma and will require six months of chemotherapy.

“You know, she’s such a nice woman, so sweet, so kind, so humble. When these things happen to these good people, I feel, like, so sad about it,” said Muguruza.

There was disappointment for 40-year-old Venus Williams though who bowed out in the first round for the first time in her career, losing in straight sets to Karolina Muchova.

Clijsters making a comeback for the second time in her career and playing in her first Grand Slam draw since 2012, was beaten in three sets by Ekaterina Alexandrova, losing 3-6, 7-5, 6-1.

In the men’s competition, number two seed Dominic Thiem progressed to round two when opponent Jaume Munar retired after the second set at Louis Armstrong Stadium.

Thiem now faces India’s Sumit Nagal, who became the first Indian man since 2013 to the reach the second round of a Grand Slam event with a 6-1, 6-3, 3-6, 6-1 win over Bradley Klahn of the United States.

The US Open is taking place in a spectator-free bubble at the US National Tennis Center in New York.

Players movements are tightly controlled and everyone onsite is being tested regularly to minimize the risk of infection.

Paire was withdrawn on Sunday but several French players who had been in contact with him were allowed to remain in the tournament under enhanced safety protocols.

Pella was excluded from last week’s Western & Southern Open, a US Open tuneup, despite testing negative after his trainer contracted the virus.

“I am mad at them because of that because they change the rules when Benoit tested positive. So I want to know why,” he said after being knocked out in the first round.