Bush tea — infusions of indigenous plants and herbs deemed to have medicinal properties — is still fairly well-consumed in the Caribbean. Barbadian visual artist and cultural activist Annalee Davis is taking the concept to a new level through her work around the well-known drink.

In a region still grappling with the fallout from colonialism and slavery — trauma that is rooted to the land — Davis’ project, “Bush Tea Plots,” seeks to develop post-plantation regenerative strategies. The result is a progressive interweaving of agriculture, economics, art and history that has the potential to not only make Caribbean people reframe the past but build on that resilience to create a hopeful future, tackling challenges like climate mitigation and COVID-19 head-on.

The fact that Davis’ studio is located on a dairy farm that used to be a 17th-century sugar plantation makes her discoveries even more tangible, as her art and writing literally engage with the shards of that historyVia a YouTube livestream on May 14, 2020, Davis spoke with Keisha Farnum, the managing director of Walkers Institute for Regeneration Research Education and Design (WIRRED), about some of these concepts, and engaged with me right afterward via email and WhatsApp, where we further examined some intriguing questions.

Janine Mendes-Franco (JMF): Bush tea provides a non-threatening way to bridge the chasm between the shared history of our region and its collective future. Did you consciously choose an approach that turned the drink of our former colonisers on its head, or did it emerge organically?

Annalee Davis (AD): This particular landscape and the context of the plantation have formed the baseline of my work for decades. I tend to ruminate on an idea for quite some time, maybe years, until it coalesces into something more tangible. (Bush) Tea Services [a related project] evolved from the Wild Plant drawings on ledger pages and from the land in an organic way. Walking the fields, as Rebecca Solnit suggests, is a way to measure our bodies against the land and I am constantly measuring my body against this land during my roaming dawn ritual where ideas reveal themselves and later manifest in the studio.

JMF: As Caribbean people take control of our historical narrative, how important is it to talk about the trauma in order for collective healing to take place — and how critical is art to that cure?

AD: I have been concerned with how shared historical suffering reveals itself communally and how individuals and nations manage trauma and the desire for self-fulfilment in small places like Barbados, where social life and kinship are predominantly experienced in separate social spheres.

Art is pivotal in the curative space because it registers beyond the intellect at a sensorial level. However, before we heal, difficult conversations analysing the past, facilitating opportunities to broaden identities, and expressing solidarities to shape the future are essential.

A virtual slaughterhouse sits beneath our soil, sowing the seeds of contemporary issues with which we grapple today. These legacies emanate from the subterranean layers of this land as living ghosts from our collective past. There is so much work to do and artists are critical to the conversations as we have the power to envision alternative futures for us all.

JMF: I was recently explaining to someone outside of the region that Barbados, highly reliant on tourism, is perhaps the most manicured of all the Caribbean territories. Bush, on the other hand, is wild. How has this project helped you reconcile the two?

AD: I’m not sure I have. If anything, bush reminds me how fake the polished tourist environment is — from which I’m quite removed. Bush is wild and has taught me so much more about myself and the way in which I was (mis)educated. As a young child I learned that ‘weeds’ were not valued and were removed manually or eradicated chemically. Much later, I understood the importance of bush, and the significant role played by wild botanicals in regenerating the soil. 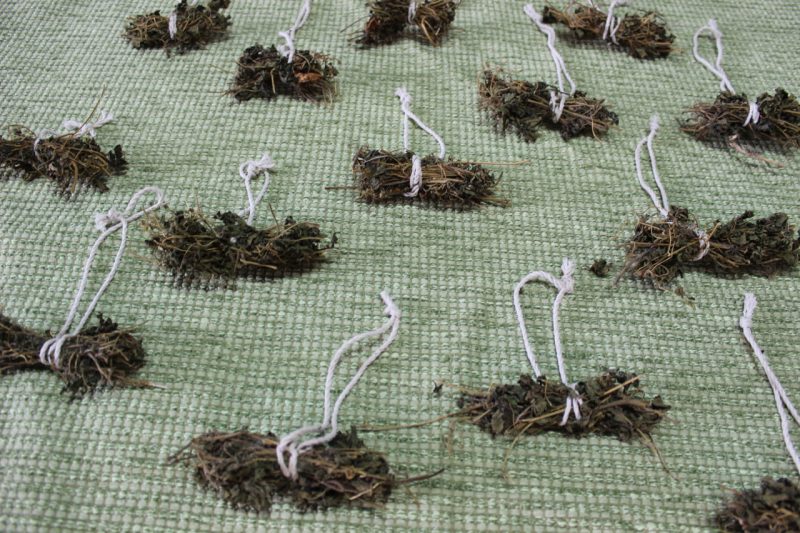 AD: I now see wild plants as active agents in the process of decolonising fields, performing quiet revolutions by asserting themselves against an imperial, monocrop landscape. A proliferation of wild plants and trees growing in abandoned sugar cane fields now contribute to greater biodiversity in Barbados since the late 17th century. Walking these fields at Walkers and directing my attention toward plants often ignored, reorients my understanding of this land and our history away from dominant narratives. Phytoremediation — the capacity of some plants to remove toxins from the soil through their roots — has become a conceptual springboard for this series of drawings and a powerful way to instrumentalise the bush.