President Donald Trump’s debasing of fact, divide-and-rule tactics and endless quest for new political enemies may be disastrous in a pandemic. But such behavior, combined with the promise of an American comeback, still adds up to a formidable electoral arsenal.

The President gave every impression Thursday of battling for his political life during a visit to Michigan, a state that crystallizes the themes of his bid for a second term and that could be decisive in his clash with Democrat Joe Biden. It was his most explicit display yet of his plans to beat treacherous pandemic politics and criticism of his leadership in pursuit of an even more logic-busting victory than in 2016.
His day laid bare the strategy of once again become the voice of “forgotten Americans,” who are now facing the worst economic blight in nearly a century.
By refusing to wear a facemask on camera, Trump signaled to his core supporters that he stands with their demands to get the country back to normal, despite his public health officials’ warnings about a possible return of coronavirus. 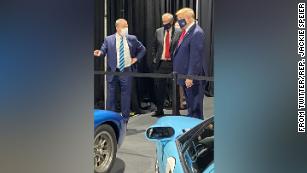 Trump told reporters that he wore a mask when he was away from the cameras, not wanting “to give the press the pleasure,” and a photo of him wearing one circulated on social media after his visit.
close dialog