An aspiring rapper sought fame and fortune. So he had a hit man kill his mom to inherit her savings, prosecutors say.

A Chicago based upcoming rapper Qaw’mane Wilson also known as “Young QC” has been sentenced to 99 years in prison after he hired a hit man to murder his own mother so that he can have access to her bank accounts and life insurance.

According to Chicago Times, the rising rapper was on Friday found guilty of the murder-for-hire last year, and sentenced to spend the rest of his life behind bars. The gunman, Eugene Spencer, was sentenced to 100 years.

“The word is ‘matricide,’ meaning murder of one’s own mother, is a big offense,” Cook County Judge Stanley Sacks who jailed the men said.

In 2012, Wilson, who was the only child of her mother hired a hitman Eugene Spencer to kill her so he could have access to her accounts. Yolanda Holmes was shot and stabbed to death by the hitman after he was ordered by Wilson to “make sure the b*tch is dead.”

It was also revealed that Spencer drove with Wilson’s girlfriend to the rapper’s mum’s home to kill her.

He reportledly shot Ms.Holmes as she slept in her bed, then struggled with her boyfriend, knocking him unconscious, before returning to stab Holmes after a phone conversation with Wilson, who ordered him to “make sure the bitch is dead.”

Months after his mother’s death, Wilson collected the money in his mother’s bank accounts amd used it to fund his extravagant lifestyle.

In a YouTube video that was played for the jury, Wilson withdrew thousands of dollars from a bank and tossed wads of cash to a crowd of people he said were his fans and wrote, “I am Nicki and I give back to my fans and my supporters its only right.”

Cook County Judge Stanley Sacks said during the sentencing that Holmes was a devoted mother who gave her son anything he wanted.

“Whatever he wanted, his mother gave to him. A car. A job. One could say he was spoiled.“She gave Qaw’mane life, and it was his choice to take it way from her,” Judge Sacks told the court yesterday.

When asked if he had anything to say before Sacks made his ruling, He said” “I just want to say, nobody loved my mother more than me,” he said. “She was all I had. That’s it.”

He showed off puppies he purchased for $1,500, a new collection of Air Jordans, as well as guns, marijuana and gold chains, DNAinfo Chicago reported. He filmed a music video for a rap song, which he uploaded to his 108,000 YouTube subscribers. He started a new YouTube show called “The Nick Story,” described as a “family drama.” And in videos and selfies, he flaunted the new Mustang and flashy watches. He withdrew nearly $70,000 from his mother’s accounts in the months after her death, the Sun-Times reported.

“He gained access to her wealth and whatever she had,” Tia Bouvi’a, who also worked with Holmes at the salon, told DNAinfo. “You just don’t start to splurge immediately after your mother was murdered.”

Publicly, Young QC spoke at least once about his mother’s death before his arrest. He showed up at a funeral for a teenager who was shot to death in 2013.

“My mother, she was a neighborhood woman,” he told WGN. “A guy entered our home and murdered her, just to steal.”

During his trial in 2019, prosecutors played the video of Wilson literally throwing away his mother’s money after he made the withdrawal from the bank, and another video of him flexing in a mirror wearing a gold chain and fanning $100 bills, 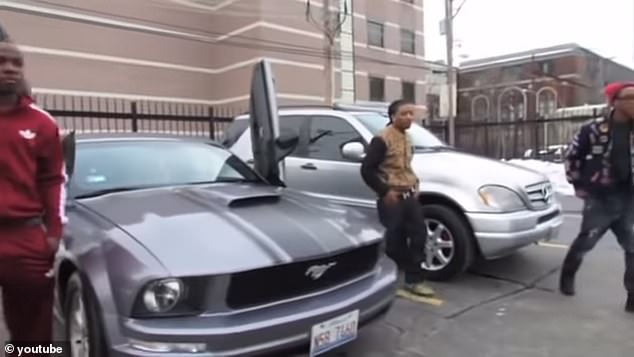 “I don’t play no games, man. I do this for real. I don’t got no problem with giving back,” he said just before throwing his mom’s money to strangers.

Wilson’s defense attorney had argued the videos were unfair, proving nothing about his motive while simply showing “that he’s a bad person.” He did not immediately respond to a request for comment late Sunday.

The jury deliberated for just two hours before convicting him, the Sun-Times reported.

Leaving the courtroom after his conviction, Holmes’s aunt, Sondra Jackson, told the newspaper, “After all this, we still don’t understand why he did it.”